They say the national bird of Israel is the crane—a cheeky jab at the dozens of steel construction cranes that dot each of its city’s skylines, all furiously at work building in the form of condos and towering high-rises to create more space in this land-strapped little country. But in one pocket of Tel Aviv, the buildings are still close to the ground. The pace is slower.  And time, for a few hushed and sun-dappled cobblestone city blocks, seems to stand completely still.

This is Tel Aviv’s Yemenite Quarter, or the Kerem HaTeimanim. The Kerem, as locals call it, one of the world’s last thriving communities of Yemenite Jews, is a community with a stopped clock. It’s a place of hairpin alleys and low-slung buildings, where stout grandmothers stir rich, cartilage-thick soups and gossiping neighbors gather in courtyards under the hush of flowering pink mulberry trees.

“It’s a microcosm of Tel Aviv. The immigration story of the Yemenites is so dramatic and special and I think the neighborhood still holds that dear.”

In the months following the establishment of the State of Israel, the Jews of Yemen—most of whom were living in the Red Sea port city of Aden—came under attack from the local Muslim community. Jewish businesses were looted. There were riots and murders. In June 1949, Israel began what came to be known as Operation Magic Carpet, a series of secret airlifts that would eventually whisk nearly 50,000 Yemenite Jews—the nation’s entire Jewish population—out of their home country and into a new life in Israel. A huge chunk of those new residents chose to settle in a small, winding neighborhood in Tel Aviv that was established 40 years earlier by previous Yemenite immigrants. Here, the language was familiar. The smells of cooking were the same. And today, with some nearly 80,000 Yemenite descendants living within its boundaries, the flavors and colors of the old world still hang heavily in its fragrant air.

“It’s a place that drips with Tel Aviv history,” says Adeena Sussman, a Tel Aviv-based food writer and cookbook author whose upcoming cookbook, Sababa: Cooking from my Tel Aviv Kitchen, is due next spring. “It’s a microcosm of Tel Aviv. The immigration story of the Yemenites is so dramatic and special and I think the neighborhood still holds that dear.”

“You have fourth-generation hummus shops and brand-new hipster cafes, and for right now at least, they are coexisting.”

Sussman and her husband live on the edge of Kerem HaTeimanim, in a fourth-floor walk-up that they cherish for its proximity to the Carmel Market and the sea. The market, which winds down Carmel Street and is packed with spice vendors, peddlers of dried fruits, and merchants of produce every color of the rainbow, is like the spine that holds up the body of the entire neighborhood. Eighty-year-old grandmothers start their mornings dragging canvas shopping carts through its alleys and then heading home to fry up lachuch, a yeasty, traditional Yemenite pastry, which they then sell from their own kitchen windows with hardboiled egg and the fiery, garlic-packed hot sauce schug. The soup stalls and hummus vendors that cook lunch for the entire neighborhood source their ingredients directly from the market. And the neighborhood’s newer residents—young artists eager for workshop space, French immigrants keen for real estate investments, and all manner of hipster and bohemians craving a quieter corner for their Tel Aviv life—are bringing a slow wave of gentrification to this old enclave in the form of upmarket bistros, ethnic groceries and on-trend craft and textile boutiques. 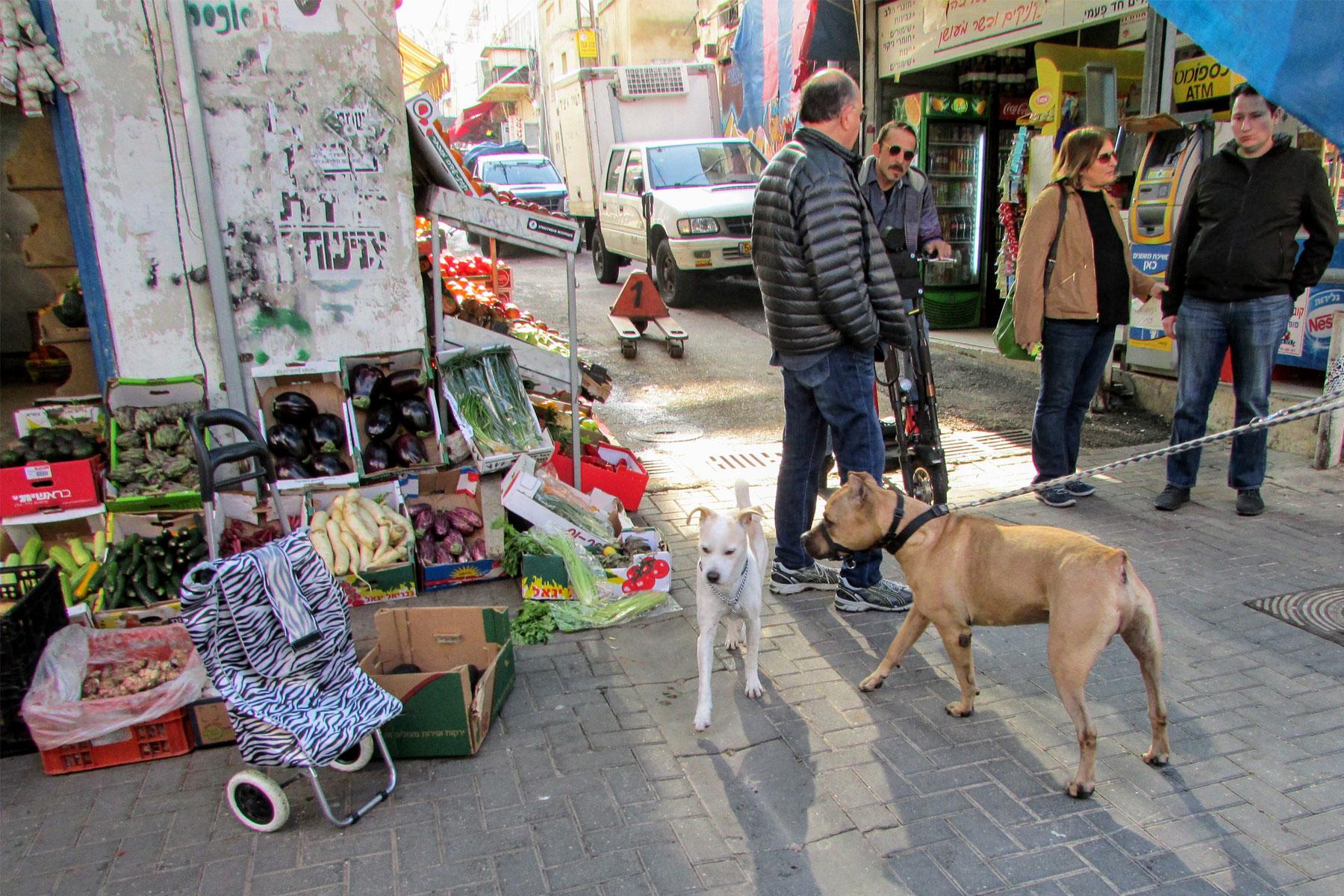 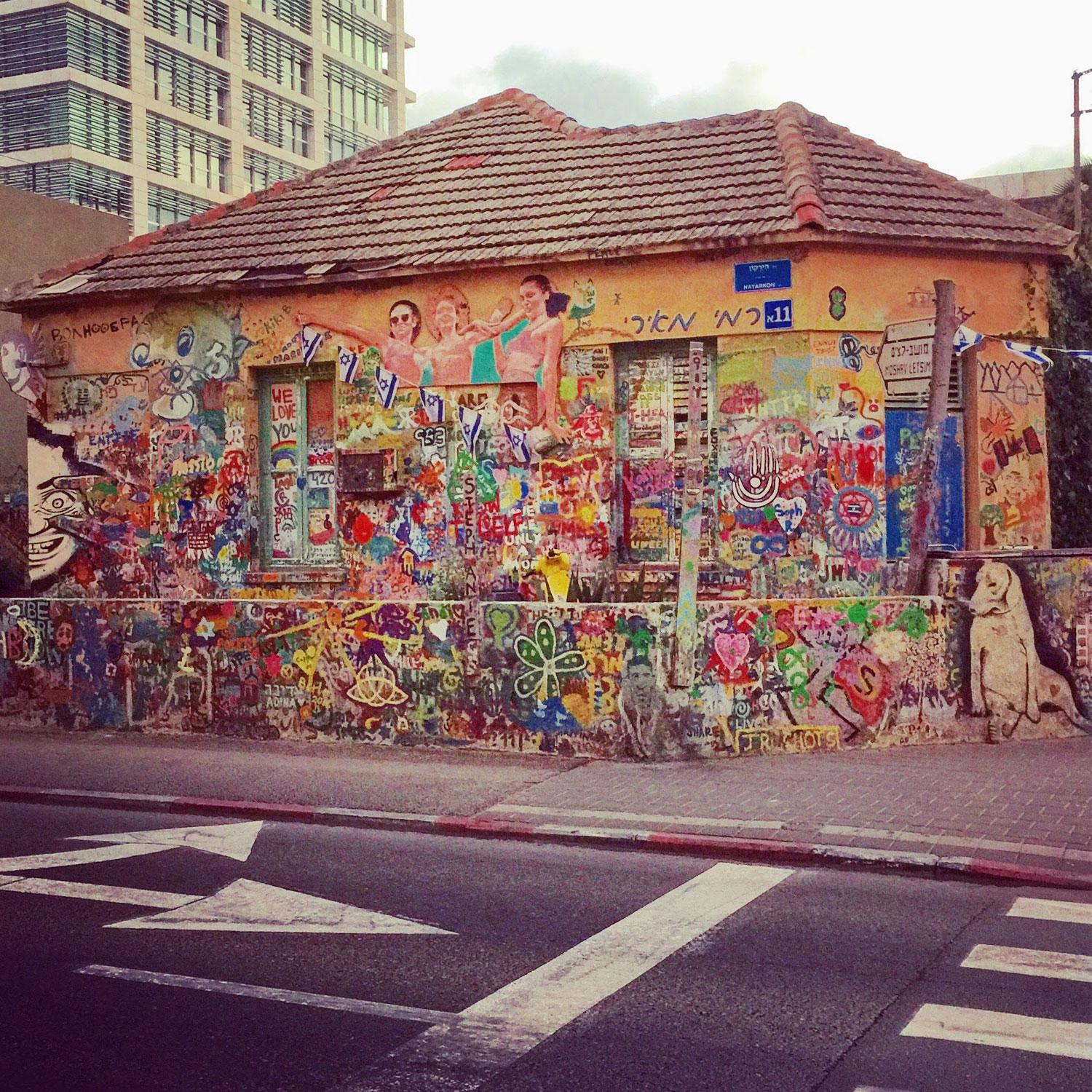 “Right now is a very interesting moment for the Kerem,” says Inbal Baum, whose tour company, Delicious Israel, offers guided food tours of both the Carmel market and the surrounding neighborhood streets. “You have fourth-generation hummus shops and brand-new hipster cafes, and for right now at least, they are coexisting. It’s not one replacing each other. Instead, you see this beautiful balance of old and new.” 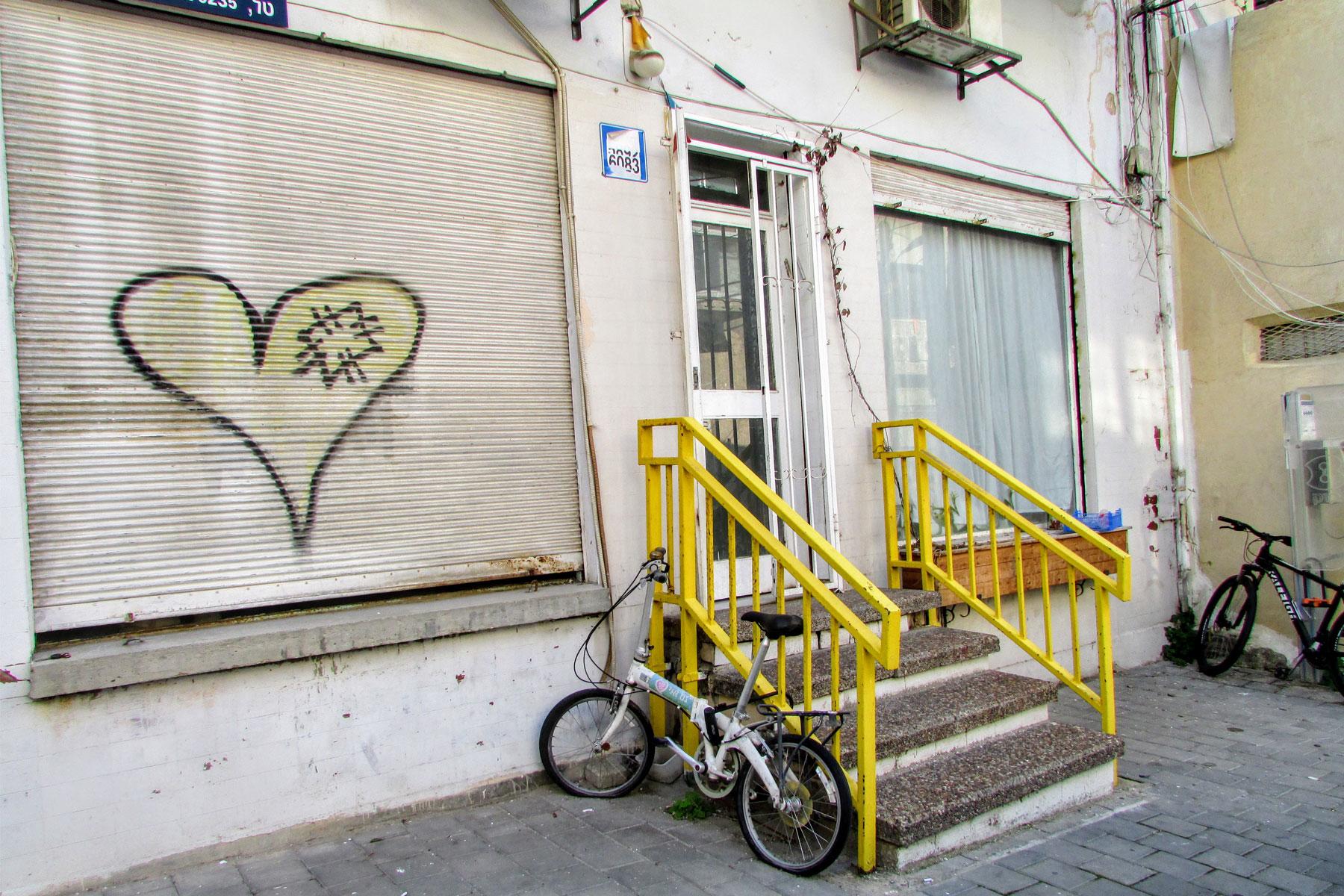 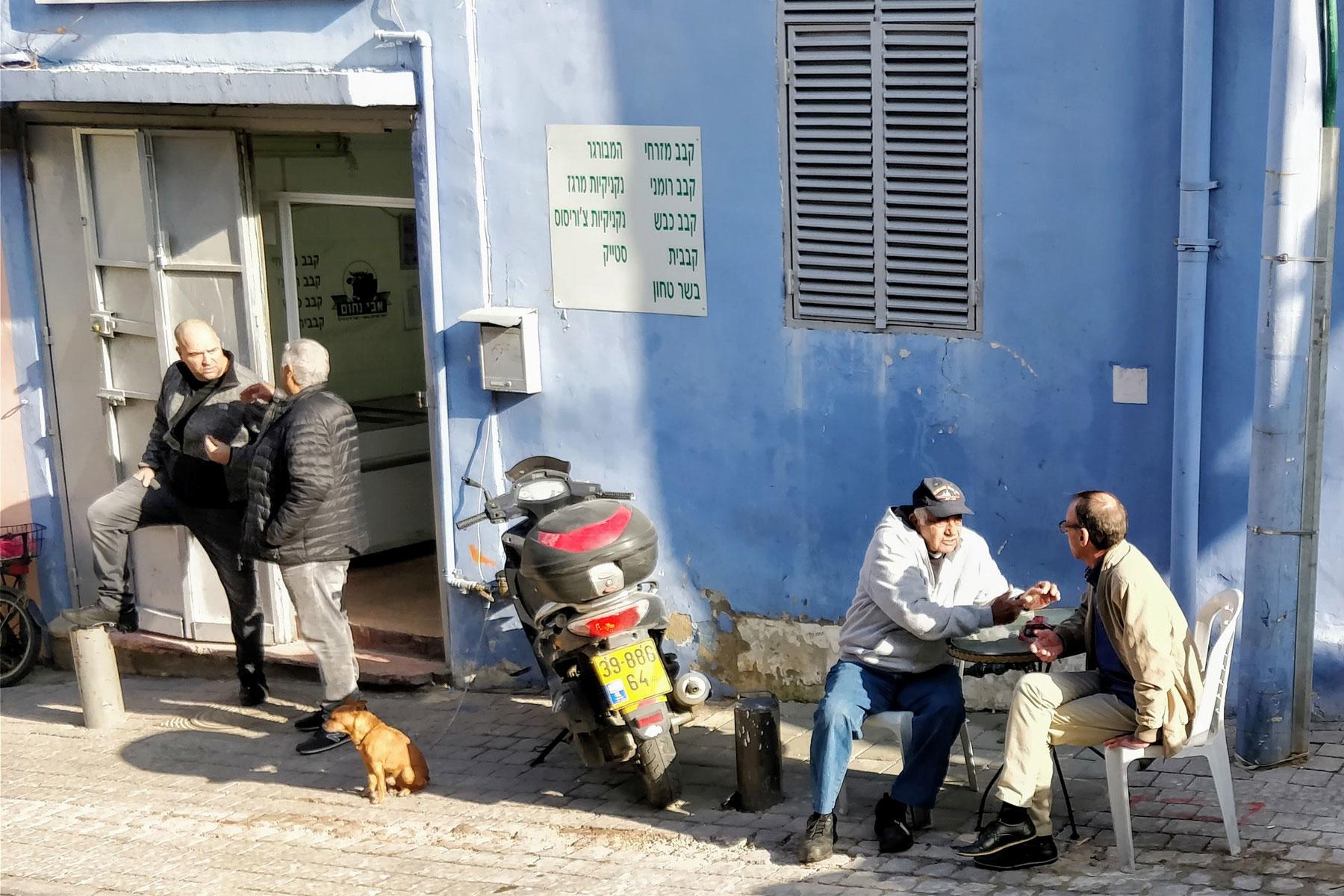 This village-within-the-metropolis is bordered by the Mediterranean to the west, Magen David Square (the intersection of Carmel Street, Nachalat Binyamin Street, and King George Street) to the east, Allenby Street to the north, and HaKovshim Garden to the south. Many of its charms lie in the unmarked, signpost-free eateries and shops that are run ad-hoc out of locals’ own kitchens and salons. To get a taste for some of the best the Kerem has to offer, check out the following:

In a city where hummus-worship has near-religious fervor, Shlomo and Doron is considered among the most sanctified pilgrimage spots for creamy chickpea dip. Get here early: The kitchen tends to close by 3 pm, when the day’s supplies are exhausted.

Yemenite breads come in all shapes and sizes, but one of the most recognizable is the finger-licking jachnun, a flaky dough rolled with clarified butter and then overnight until it turns amber-colored and slightly sweet. For some of the best jachnun in the Kerem, brave the crowds at Jachnun Buba, a hole-in-the-wall serving up the caramelized rods of pastry in the traditional style, with egg, schug, and refreshing grated tomato.

Traditional chicken soup has nothing on traditional Yemenite soup, which is thicker, more piquant, and packed with a variety of offal- and marrow-rich offerings like tail, beef cheek and even calf’s foot. To slurp some of the best, following the crowds to Shimon’s place, where the self-described King of Soups serves up steaming bowls accompanied by saluf, a rustic Yemeni pita, and the rich fenugreek condiment hilbeh.

Friday morning is the start of the weekend in Tel Aviv, and at Yom Tov Coffee Shop—a colorful, bohemian eatery with al fresco tables spilling into the street—revelers gather early to sip cappuccinos, read the newspaper and chatter with family and friends over heaping plates of salad and brioche toast. Good vibes and big appetites—only.

How do you take your coffee? With milk, sugar, or a serenade of song? At Cafe Cohen, a no-frills cafe and roastery just off of the Carmel Market that has been run by the same Yemenite family for 70 years, sitting down for a latte will also likely earn you a front-row concert seat. That’s because Shlomo, the cafe’s humble proprietor, is also a trained hazzan, or Jewish liturgical singer, who will spontaneously burst into song while grinding beans or pulling a perfect espresso shot for his patrons. On Friday mornings, in preparation for the impending Sabbath, he gives longer concerts for the entire neighborhood.

A favorite among families and large groups, Maganda is a sprawling Yemenite meat restaurant that has been a neighborhood institution since 1965. Entries are served with piles of fresh salads and heaps of steaming pita bread, so come hungry.

This tiny gem has a cult following among local foodies, and for good reason: With creative, hyper-fresh food, served with ingredients plucked that very morning from the market and executed with gourmet flair, HaBasta is among the very best of the new, gentrification-friendly institutions to join the neighborhood. For those who value a well-curated wine list and perfectly prepared seafood, there’s perhaps no better spot in the city.

10 Women From History Who Explored the World